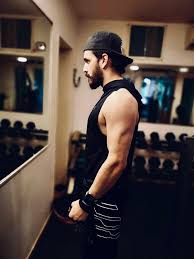 Akkineni Akhil surprises fans with new makeover. Akhil, who is seen in an action hero look with a perfect body, seems to have switched to this new look for his new film. Akhil is also making a film in the next action genre. The movie ‘Most Eligible Bachelor’, which is currently being made with Bommarillu Bhaskar, is also ready for release after Corona.

Pooja Hegde plays the heroine opposite Akhil in this movie. Film circles say that the chemistry between Akhil and Pooja Hegde is very good in this movie. The romance between them is the highlight of the movie. Presented by Allu Arvind, the film is being produced by Bunny Vass.

Along with Akhil, Bommarillu Bhaskar also had high hopes for the outcome of the film. Fans also want Akhil to receive a solid hit with this film.